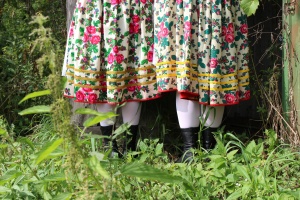 Krakow is well known not only as the site of the old royal capital of Poland, but also as a vibrant center of rich folklore, historic traditions, and arts. Elements of this appear in krakowiak with the dancers arriving in so-called Krakow’s cart. As horses are loved in this region, there is always a familiar galloping step prevalent in the dances. The men’s costumes are of particular interest with peacock feathers in their hats and strings of metal rings at the belts; a historic reference to an ancient warrior’s outfit. 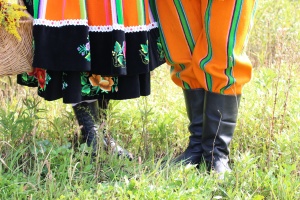 Kujawiak is also a national Polish dance from the region of Kujawy after which it is named (the region is in central Poland, on the Mazovian plains) The kujawiak was originally danced with a calm dignity and simplicity, in a smooth flowing manner “reminiscent of the tall grain stalks in the fields swaying gently in the wind.” There were no vigorous stamps and no drastic changes of tempo. This style was passed on from generation to generation. Because of its beauty the kujawiak was embraced by the landed gentry and the nobility.

Oberek, also known as obertas (common in the 19th century), is the most vivacious and acrobatic of the so-called five national dances (with polonaise, mazur, kujawiak, krakowiak). The oberek originated in the villages of Mazowsze in central Poland; it is danced by couples to instrumental music in triple meter. The name oberek is derived from the verb obracac – to spin.; These names reflect the fast tempo, circular movement, and the whirling character of the dance. In the national form, the basic “bouncy” step of the oberek which articulates its triple meter may be danced with a partner held in a dance position, with partners apart facing each other, or in solo dancing. There are more differences between the stylized form and its model; the stage-oriented folk dance groups use many ornamental and acrobatic figures in the main form of the oberek, kneeling, heel clicking, jumping, stamping and double-stamping, lifting the partner (performed by both men and women) 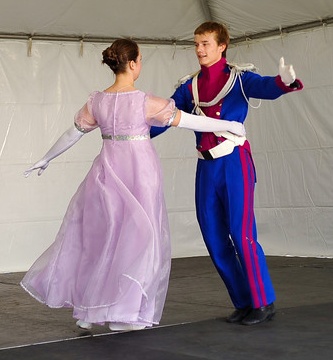 Mazur is regarded as one of the five Polish national dances. Like the Polonaise, it was first danced by peasants in different regional versions. Eventually adopted by Polish noblemen, it had become a national dance. Mazur also became very popular in European courts under the French name of Mazurka. The rhythm of Mazur is well known from Mazurkas created by the famous Polish composer, Frederic Chopin.

If you have any questions, contact Dolina at dolina.mn@dolina.org

Dolina is a 501c3 non-profit organization.  If you would like to make a donation, please visit our GiveMN donation site.